Several have requested a document describing the XOOM/PLATFORM architecture. So here it is. This specific article is kept relatively brief. This is in part to emphasize the simplicity of the XOOM/PLATFORM. It’s just not complicated or difficult to describe. The other motivation for brevity is not knowing entirely what architects and developers are looking for in such a document. Thus, I am open to feedback and input on what additionally is needed by readers.

The following is a XOOM/ACTORS architecture diagram. 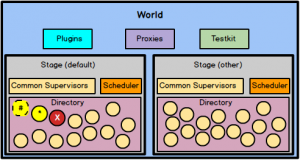 # The private root actor, which is the parent of the public root actor and the dead letters actor

* The public root actor, which is the default parent and supervisor if no others are specified

X The dead letters actor, which receives actor messages that could not be delivered

I next discuss XOOM/CLUSTER, and then move on to the entire platform.

The XOOM/CLUSTER is a key component that sits on top of XOOM/ACTORS, to support the development of scalable and fault-tolerant tools and applications. In other words, additional tools that we are developing to continue to build out the XOOM/PLATFORM, will almost always be built on top of XOOM/CLUSTER. Additionally, we intend for you to implement and deploy your services/applications in clusters.

Generally a cluster will be composed of an odd number of multiple nodes (not just one, but for example, 3, 5, 21, or 127). The reason for choosing an odd number of nodes is to make it possible to determine whether there is a quorum of nodes (totalNodes / 2 + 1) that can form a healthy cluster. Choosing an even number of nodes works, but in that case, when loosing one node, it doesn’t improve the quorum determination, nor does it strengthen the cluster when all nodes are available. When a quorum of nodes are available and communicating with one another, a leader can be elected.

The XOOM/CLUSTER works in full-duplex mode, with two kinds of cluster node communication channels. There are the operational channels, which the cluster nodes use to maintain the health of the cluster. There are also application channels, which the services/applications use to pass messages between nodes. Using two different channel types allows for tuning each type in different ways. For example, application channels may be assigned to a faster network than the operational channels. It also opens the possibility for either channel type to use TCP or UDP independently of the other channel type.

Besides scalable fault-tolerance, the XOOM/CLUSTER also provides cluster-wide, synchronizing attributes. This enables the cluster to share live and mutating operational state among all nodes. 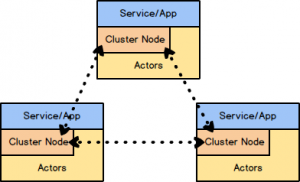 In the above cluster, if one node is lost the cluster will still maintain a quorum. However, if two nodes are lost and only one node remains in a running state, the quorum is lost and the cluster is considered unhealthy. In that case the one remaining node goes into idle state and awaits one or more of the other nodes to return to operational state, which will again constitute a quorum and enable a healthy running cluster.

So far I have discussed the foundation of XOOM/ACTORS and the scalability and fault-tolerance achieved using XOOM/CLUSTER. But, what comes next?

For a few different reasons we have decided not to disclose the roadmap for the full platform at this time. However, I can tell you that there are currently seven additional platform components planned or in development. Ultimately the platform will be even greater than nine components, but those will follow the ones that we consider essential. What we are willing to share is found in the following diagram.

The XOOM/DIRECTORY supports service registration and discovery. The XOOM/AUTH service provides security within the XOOM/PLATFORM. The XOOM/AUTH may also be used by any service/application that you create, but it is not a requirement that your organization adopt it as your security standard. Does the above diagram imply strong coupling between XOOM/PLATFORM components, or with services/applications with the platform? Of course not!

I hope that this architecture overview has help you understand the significance of the XOOM/PLATFORM, and where we are headed.